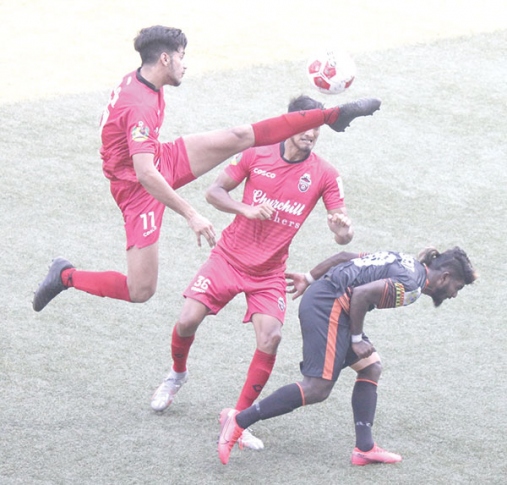 FC Goa move to 13 points from seven matches while Churchill Brothers have 10 points from eight matches.

Red Machine would have taken an early second minute lead when Afdal Varikkodan snatched the ball from Christy Davis and took a touch and drilled a power-packed right footer from outside the penalty box. But his effort which was superbly tipped over the cross bar by keeper Antonio Da Silva.

Five minutes later, Young Gaurs U-20 Joybert Almeida sent a long ball to Christy Davis who in turn played a through pass to Sarineo Fernandes. The last named got the better of Trijoy Dias and darted inside the penalty box and scored past the onrushing keeper Debnath Mondal with a neat placement, 1-0.

However, in the 40th minute, a square pass by Young Gaurs defender Lalhmangaihsanga to Lalremruata HP inside the penalty box saw Churchill’s Afdal Varikkodan snatch the ball and fire past keeper Antonio Da Silva for the equaliser, 1-1.

With the match just two minutes old into the second session, Red Machines received a jolt with the sending off of defender Rajendra Bairola for double booking by referee Sunil Nanodkar.

Young Gaurs almost took the lead in the 49th minute where Lalremruata HP found Malsawmtluanga on the right flank whose cross at the goal was not cleanly collected by keeper Debnath Mondal. Joybert Almeida took the header which was cleared off the line by Kidron Fernandes.

Churchill keeper Debnath Mondal brought an excellent save to block a hot blooded shot from substitute U-20 Velroy Fernandes from inside the penalty box.