Churchill Brothers SC play their final game against Round Glass Punjab and a win is mandatory for them to win the I- league title. Cafe spoke to fans in Goa to ask them what needs to be done 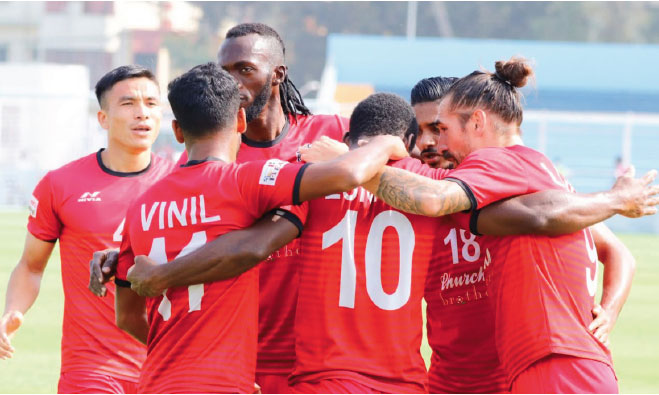 It has been
a while since a team from Goa won a national
title. After the disappointment of FC Goa’s exit in the semi-finals, Churchill
Brothers SC has an opportunity to right that wrong. Churchill had a
6 point lead 3 games ago and now fate is no longer in their hands. They missed
their main defender Hamzah for the 2 games they lost back to back. They should
just focus on winning their game and pray for a miraculous draw in the Gokulam
vs Trau game. RG Punjab have also been good lately so it’s not going to be easy
task but nothing less than a win is what Churchill should be looking for.- Conrad Barreto, MargaoEvery player in
the starting lineup should play their hearts out against Punjab FC and win the
match and as a fan we can expect other matches to draw things have not gone in
Churchill brothers way after the loss against Mohammedan sporting- Jonas Varella, Panjim‘Churchill
Brothers are surely going to win the match this Saturday. They were shaky in
their last 3 matches but this time it’s gonna be a *’DO or DIE’* performance.
We don’t miss a single match of CB and are looking forward to this match on
Saturday, the 27th March. It’s gonna be like the finals for the Churchill Brothers.
Viva Goa! Viva
Churchill brothers!’- John Pereira, Caranzalem, Goa.We are winless
in last 3 matches and it’s a must win game for us, Hope we will score first and
build on that lead to finish off. Luka Majcen and Claywin Zuniga will be key
players for goals . Hoping and praying big time the other match will be a
draw…FORZA RED MACHINES.- Frank Fernandes, Vanelim, ColvaLast three
games have not gone the way they were expected to go. Mostly I feel because of
the lack in experience in the defence, especially Hamzas absence hurt Churchill
a lot. Also during the last three games the strikers were hesitating to shoot
once they inside the box .Looking at the scenario nothing less than a miracle
is needed. Hopefully the other game ends in a draw and Churchill wins the last
game. My predication is Churchill 2-1 Punjab- Randall Fernàndes, South GoaIt’s like
history has repeated itself once again. Churchill Brothers FC had everything in
control until the last four or five matches but now suddenly they have a
do-or-die situation added with being dependent on the result of another game
which is not in their hands.Overall it has
been an amazing season for the
club from South Goa and although winning the I league is of utmost importance
going ahead but these issues of closing out the title should not arise once the
promotion to the ISL begins as it might get way more heartbreaking than the the
resultant outcome this season.I wish
Churchill brothers all the best going into the final game and I hope that they
win the I league title once again and fly the flag of Goan football even
higher.- Omi, Football
Enthusiast & Musician, Vasco-Da-GamaChurchill
should aim to take the initiative from the word go by pressing the opponents high
and capitalise if they make mistakes. Taking a big lead at half time will make
both the teams playing in “winner takes it all” nervous and cancelling each
other leading to a draw. My predictions: I feel Churchill will win their match
but it might be too little too late. My bet is Gokulam to win the title But I
hope I’m prove wrong- Rohan Rodrigues, UtordaChurchill
Brothers have been carrying a legacy for the longest time now and have been
winners in the past. Yes, they have had a rough patch towards the end of the
season. For the final league match, they need to back their ability, talent and
the champion in them to produce an amazing game of football. Don’t want to even
think about the other result, hopefully it goes our Way. Viva Churchill Brothers!- Kunal D’costa, Margão