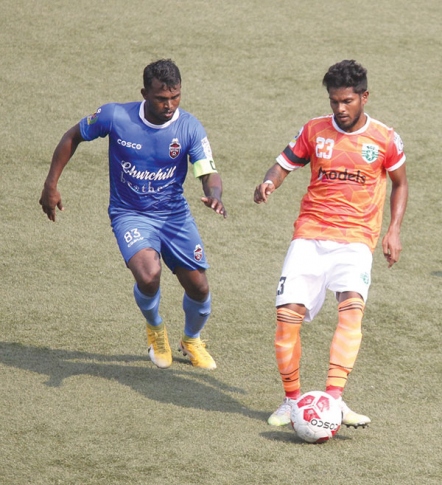 The much awaited match between the last edition GPL joint winners saw Sporting score both the goals in the second half through Chukwuemeka Philip (70″) and self goal Allen Fernandes (87″) minute.

With Wednesday’s win, Sporting stay unbeaten with 9 points from three league matches while Churchill Brothers are with just three points from five matches.

The Red Machine started earnestly and had better of the exchanges in the first 20 minutes of the first session where Mauvin Borges’ strike missed narrowly while a thundering left footer by Rakesh Das was brilliantly paired for a corner by keeper Ozen Silva.

Churchill coach Norberto Gonsalves had to come with an early ninth minute substitution replacing Mauvin Borges due to injury and bringing in Ginminthang Hangsing.

At the half an hour mark, Flaming Orange showed some urgency in their attack but U-20 Rohit Totad turned out to be a poor finisher missing three glorious chances from inside the penalty box.

On crossing ends, in the 52nd minute, Churchill’s Jouston Barbosa collected a cut pass from Ginminthang and drilled a shot at the goal which was blocked by defender Myron Fernandes.

At the other end a long throw in by Assumption Soares found Nigerian Chukwuemeka Philip who made his debut just outside the 6-yard box but the latter shot over the cross bar.

However, in the 70th minute, Philip who had a very poor outing scored. Marcus Mascarenhas switched the ball from the left flank to Myron Fernandes who floated the ball back to Marcus inside the goal area whose diving header was blocked by Churchill’s keeper Debnath Mondal only to find Philip who was lurking nearby tap the ball into the goal.

Flaming Oranje got a self goal in the 86th minute where a shot at the goal by Marcus Mascarenhas was blocked by keeper Debnath which hit his own defender Allen Fernandes and the ball rolled into the goal to make it 2-0.